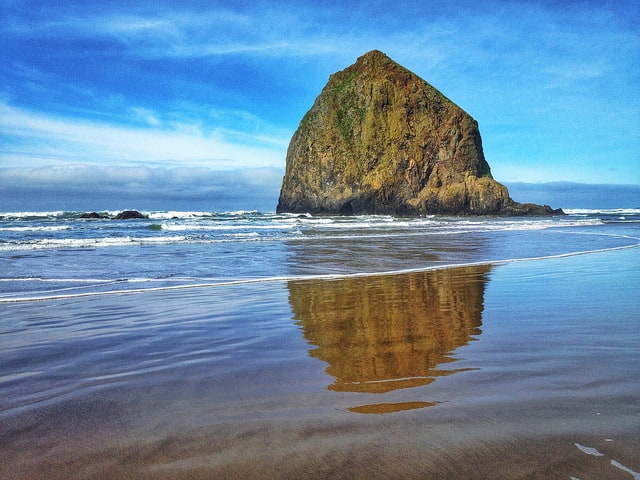 The famous Oregon landmark, Haystack Rock, is located just 80 miles West of Portland in the coastal town of Cannon Beach. A popular destination for visitors from all over the world, Haystack Rock stands 235-feet tall and is part of the Tolovana Beach State Recreation Area. Haystack Rock is part of the Oregon Islands National Wildlife Refuge and is a State protected marine environment.

While there are a few other geographic landmarks in Oregon that go by the same name, Cannon Beach Haystack Rock is one of the most, if not the most, popular in the state. Mainly composed of Basalt, Haystack Rock was formed by lava flows an estimated 10-17 million years ago. The same volcanic activity resulted in other popular Oregon coast landmarks like Saddle Mountain, Tillamook Head, and Arch Cape. It is estimated that Haystack Rock weighs over one million pounds. The rocks adjacent to Haystack Rock are often referred to as “The Needles” getting their namesake from the saying “Needles in a haystack.” Another popular “Haystack Rock” in Oregon is located in the beach town of Pacific City. It is estimated that Pacific City’s Haystack Rock is the fourth tallest sea stack or off-shore monolith in the world. While this is not confirmed, Pacific City’s Haystack Rock stands almost 100 feet taller than Cannon Beaches at 327 feet tall.

Haystack Rock is reachable by foot during low-tide and is home to dozens of species of marine life, and birds. The tide-pools are home to colorful starfish, sea anemones, and hermit crab among other things. During the summer, Haystack Rock is famous for being one of the most viewable Tufted Puffin sites in the world. Designated as one of seven Oregon Marine Gardens and a part of Oregon Islands National Wildlife Refuge, Haystack is a protected landmark limiting visitors from interacting with wildlife on, and within 300 yards of the rock. Preserving the wildlife of Haystack Rock is so important to the city, state, and Cannon Beach visitors that the Haystack Rock Awareness Program was established by volunteers in the mid-80s. The program distributes information and holds events on Haystack Rock and the marine and wildlife it is home to.Aside from being located in a town that was named one of the 100 Most Beautiful Places by Time Magazine, Haystack Rock is known for being featured in popular movies like Steven Spielberg’s 1941, Kindergarten Cop, and most famously, The Goonies. Cannon Beach Chamber of Commerce estimates more than 400,000 people visit the city every year. With a population of only 1,600, the Haystack Rock Awareness Program estimated they had intercepted 1,200+ people climbing Haystack Rock between February and September of 2015. That same year program staff had an estimated 17,000 interactions where beachgoers inquired about Haystack Rock. Interactions are recorded with a tracking device that is now kept at the beach due to increasing tourism. Tourism has grown so much that The Seattle Times claims Haystack Rock is the number one most Instagrammed location in Oregon.